In 1947, scientists researching yellow fever placed a rhesus macaque in a cage in the Zika Forest (zika meaning "overgrown" in the Luganda language), near the East African Virus Research Institute in Entebbe, Uganda. The monkey developed a fever, and researchers isolated from its serum a transmissible agent that was first described as Zika virus in 1952 (see figure 1). It was subsequently isolated from a human in Nigeria in 1954. From its discovery until 2007, confirmed cases of Zika virus infection from Africa and Southeast Asia were rare. In 2007, however, a major epidemic occurred in Yap Island, Micronesia. More recently, epidemics have occurred in Polynesia, Easter Island, the Cook Islands and New Caledonia. 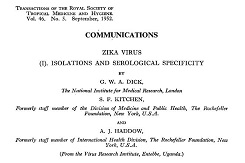 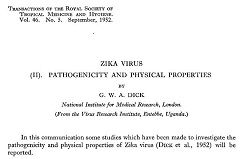 The first outbreak of the disease outside of Africa and Asia was in April 2007, on the island of Yap in the Federated States of Micronesia (see figure 2). The condition was characterized by rash, conjunctivitis, and arthralgia, and was initially thought to be dengue. The Chikungunya and Ross River viruses were also suspected. However, serum samples from patients in the acute phase of illness contained RNA of Zika virus. The Zika fever disease process was relatively mild: there were 49 confirmed cases, 59 unconfirmed cases, no deaths and no hospitalizations.

A recent larger outbreak of Zika virus outside Africa and Asia was confirmed in April 2015, in Brazil. In the district of Camaçari and the neighbor Salvador city, capital of the state of Bahia, healthcare authorities confirmed that a previously unknown disease affecting around 500 patients with flu-like symptoms followed by rash and arthralgia is indeed an ongoing outbreak of Zika fever, as proved by RT-PCR technique by researchers from Federal University of Bahia. Local authorities link the outbreak to recent increased flow of foreign visitors prompted by the 2014 FIFA World Cup, coupled with the large population of insect vectors such as Aedes aegypt and Aedes albopictus mosquitoes that inhabit the region. The spread follow a similar pattern to the also recent outbreak of chikungunya virus in the same region. 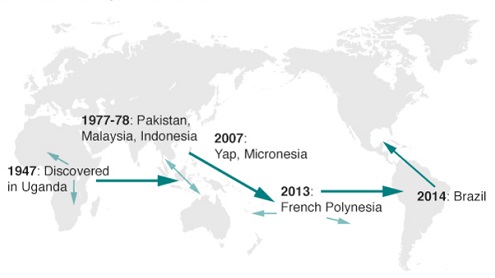 Since April 2015, a large, ongoing outbreak of Zika virus has spread to much of South and Central America, and the Caribbean. In January 2016, the CDC issued a level 2 travel alert for people traveling to regions and certain countries where Zika virus transmission is ongoing. The agency also suggested that women thinking about becoming pregnant should consult with their physicians before traveling. According to the CDC, Brazilian health authorities reported more than 3,500 microcephaly cases between October 2015 and January 2016. Some of the affected infants have had a severe type of microcephaly and some have died.